Ruth A Symes explores how our ancestors decorated for Christmas, from mistletoe to paper chains 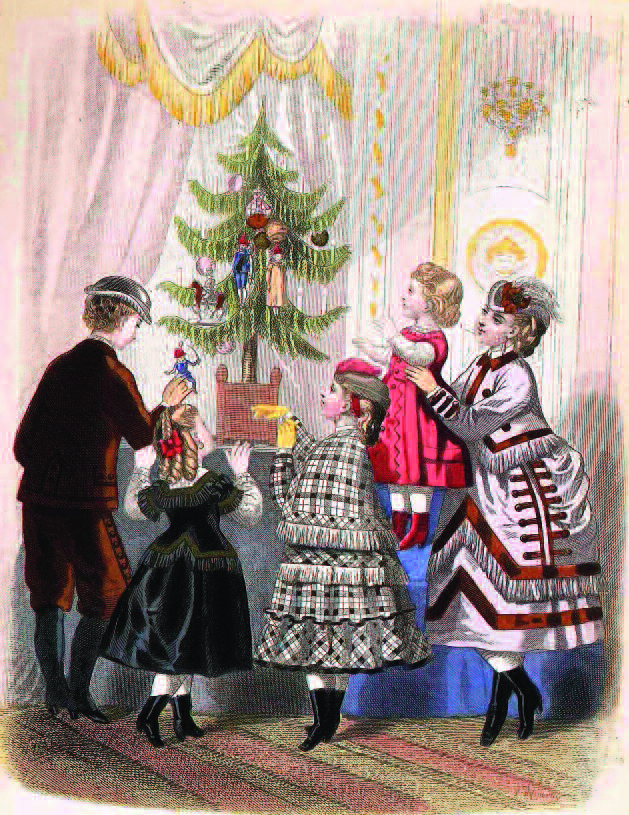 Greenery and fruit, sparkle and snow, colourfully dressed tables and walls inscribed with Yuletide mottos – Christmases past were decorated using much the same general combination of ideas as Christmases today. But the specifics of the way our ancestors decorated their homes at any given time in the past depended not only on tradition, but also on what was currently most novel and up-to-date.

In the 18th and early 19th centuries, domestic and church decorations at Christmas tended to be simple and worked on the principle of bringing something of the outside world indoors. Our ancestors would decorate their lamps, candles and tables, very shortly before Christmas Day, with material such as holly, ivy, mistletoe and berries collected from hedges and winter gardens. The candles (attached to the greenery with wax or pins) would be lit only on Christmas Eve to minimise the danger of fire hazard. The Rev James Woodforde, who kept a diary from the mid-18th century onwards, recorded that he filled his house with holly and lit a great wax candle especially for Christmas. Fruit and vegetables, imported from overseas, or newly-grown in British hothouses, were considered decorations in and of themselves. The Market Post of December 25th 1848 noted that in Covent Garden that Xmas season, the supply of pineapples, apples, pears, hothouse grapes, foreign grapes, walnuts, lemons and oranges was "seasonally good and sold readily".

A typical home at Christmas in the mid-Victorian period, would have been decorated to draw the eye towards the fireplace, which would have been ablaze with colour and sparkle. The popular installation of a Christmas tree in the domestic environment was widely attributed to a widely publicised etching of the Royal family at Christmas, complete with a tree (decorated with tinsel made from real shavings of silver) in the London Illustrated News of 1848. Mottoes or biblical quotations, with the individual letters cut out from paper and decorated with coloured rice or cotton wadding to imitate snow were often strung across the walls. 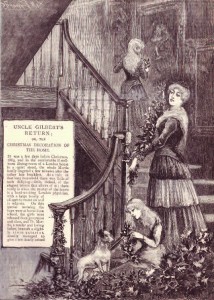 Trees were decorated with ornaments made from lace, paper, scraps of newspaper and magazine illustrations. Spurred on by the royal endorsement of Christmas, our Victorian ancestors proceeded to go decoration-crazy as the century progressed. As the Supplement to the Sheffield and Rotherham Independent of Saturday 24 December 24 1881 commented, "[Christmas decorations] are no longer hung around a room haphazard – as pineapples, apples, holly bough here, a bunch of berries there, a trail of ivy elsewhere. They are carefully planned and artistically constructed."

An ancestor might have started preparing for Christmas many days or weeks before the event, and there was plenty of advice around to suggest just what tools he or she would need to make a good job of it: "A good table to work upon is an essential; some stout brown carpet paper for cutting out letters or making backs for monograms and medallions; cardboard for suspended letters; wadding to imitate snow; strong twine; fine wire; a few old barrelhoops; some whole rice uncooked; red sealing wax; spirits of wine; needles and woollen threads, scissors; hammers and tacks, are among the domestic trifles which come in usefully." (Supplement to the Sheffield and Rotherham Independent, 24 December, 1881)

"Hall and staircase decoration, rather than crowding evergreens into reception rooms, is a modern fashion. There is an air of welcome to a Christmas guest when he steps into a hall and mounts a staircase greeted by graceful festoons reaching from one corner of a cornice to another," Supplement to the Sheffield and Rotherham Independent, Saturday December 24th, 1881. 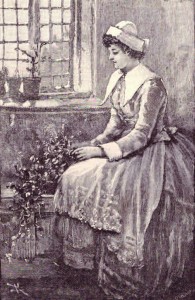 By the end of the Victorian period, Christmas had become big business. Homemade decorations were supplemented in wealthier families by shop-bought items. The image of Father Christmas, as a prolific gift giver – rather than simply in his old evocation as an expression of festive hospitality – appeared frequently in the press, on cards and other festive paraphernalia. New department stores across the country stocked up with the latest glass and lead toys and baubles many of which were manufactured in Germany (though, even as early as the 1890s, some came from the East). Conway, Jones and Co of Northgate in Gloucester, was typical of a small family-owned shop which boasted a Christmas window full of "thousands of clever Japanese toys and novelties suitable for Xmas trees and bazaars, at 1 d each". (The Citizen, 18 December, 1897)

Yew, box and fir were all used to decorate the house at Christmas as well as the more obvious holly, mistletoe and ivy.

The boon in decorating for Christmas went on right through the Edwardian period at which time, every nook and cranny became a possible location for ornamentation: mantelpieces sported homemade convex wire cages, through which "the stalks of... flowers, holly, etc could be passed", trellis decorations surrounded doorways, wooden hoops trimmed with holly hung from ceilings, and (the middle-classes in particular) sought to outdo each other with decorated friezes and dado rails.

No longer were Christmas decorations confined to the home and church, now a vast array of public buildings were resplendently dressed for Christmas. Schoolrooms were festooned with chains of paper roses or coloured flags looped high across the room, or draped from the corners of the walls to a the centre point where they would be fixed to a hook or ceiling rose. In 1916, despite the First World War, Walsall Hospital boasted a huge Christmas tree which "stretched right up to the ceiling, with a lovely fairy doll at the top and hundreds of shining stars and balls hanging on it, as well as dozens of small trumpets and whistles".

Christmas decoration in Britain continued to keep pace with international politics and technological developments. Unsurprisingly, World War One saw a huge drop in the sales of ornaments made in Germany. In 1917, electric Christmas lights for Christmas trees were first on commercial sale (although they had actually been invented as early as 1880). 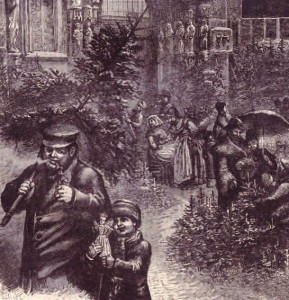 The 1920s brought the invention of adhesive tape and artificial holly and mistletoe. Of the new imitation greenery, one lady correspondent eulogised to The Evening Telegraph, "they are very clever imitations and can scarcely be detected from the real thing" (20 December 1927). Crepe paper (which had first appeared in Britain in the late 19th century) had its heyday in the twenties. It was perfect for Yuletide artistry since (as the same lady continued) "it was obtainable in a multitude of colours and patterns... [was] tough and strong, [and] possess[ed] an elasticity which [was] ideal for the making of decorations".

The difficulties of affording and sourcing luxury materials were everywhere apparent during World War Two and this was reflected in a move back towards a more natural kind of Christmas decoration in most British homes at this time. The Burnley Express and News commented grimly on December 27th, 1941, "Except for holly of course, of which there appeared to be quite a lot, Christmas decorations in the home were not on the same scale as in previous years, there being obvious reasons for this."

Once the war was over, however, our ancestors returned to decorating their homes with renewed zest and an eye for modernity. Cellulose paper (first manufactured in Britain in the 1930s), was newly popular because it sparkled in firelight or electric light, artificial tinsel garlands were at the height of their popularity and aluminium Christmas trees arrived in 1955.

Plastic novelty ornaments and tree decorations could be purchased cheaply from Woolworth's (the American-owned emporium increasingly to be found on every British high street). The festive celebrations of the 1950s gave a focus for the mixture of nostalgia, patriotism, but most of all, the optimism, that characterised the decade.

Christmas, of course, is a peculiar time when we are wont to reflect that both everything and nothing remains the same. It's perhaps comforting to know that our ancestors, like us, always welcomed the festive season by experimenting both with natural ingredients and traditional ideas, and with new materials and novel technologies. Long may it remain a magical combination!

RUTH A SYMES (www.searchmyancestry.blogspot.co.uk) is a freelance writer and historian. Her latest book, Family First: Tracing Relationships in the Past, was recently published by Pen & Sword.