These are extracts taken from some of our articles that have been published in Discover Your Ancestors. You can read more by subscribing today!

What links Peter Mandelson and Victoria Beckham? Many celebrities' genealogies hold some interesting surprises... Ever since Who Do You Think You Are? first appeared on our screens in 2004, there's been a growing appetite for digging into the roots of the rich and famous. From Boris Johnson's unsurprising direct (but illegitimate) descent from George II to Jeremy Paxman weeping to learn of his Scott[...] Continue Reading

A comedy heroine descended from a WW1 hero

Nick Thorne takes a look at the family of the well-loved and talented entertainer Victoria Wood Recently we sadly lost Victoria Wood OBE CBE, the much-loved English comedian, actress, singer and songwriter, screen-writer and director. She was noted for her skills in observing culture, and in satirising social classes. Many people will know she was from Lancashire –but what more is known about her family story [...] Continue Reading

Blue sap in the family tree?

Jill Morris ﬁnds an online treasure trove of royal records For anyone lucky enough to have found an ancestor with royal connections, or simply those with an interest in the history of the English and British monarchy, the digitised books available in the Peerage, Gentry and Royalty section of The Genealogist's website (www.thegenealogist.co.uk) will prove a very useful tool in furthering enquiries. The[...] Continue Reading

The Fortunes of War

Nick Thorne discovers the highest ranking British ofﬁcer in online German prisoner of war records Recently I was doing some research on soldiers, sailors and airmen within the newly published World War Two prisoner of war records on TheGenealogist.co.uk and I couldn’t help but notice how so many of the British and Imperial prisoners of war held by the Germans were mostly young men at the time of their captivity. [...] Continue Reading

The latest version of TreeView now allows you to work from the convenience of your home computer, as Chris Paton explains One of the most important decisions that we need to make when carrying out our family history research  is the means by which we collate the information that we discover. There are many software programs that can help us to do this, but very few constitute the holy grail of the genealogy world – a program that not only does the job, and does it well,[...] Continue Reading

Nick Thorne researches a 19th century cause célèbre with the help of TheGenealogist's record collections The Illustrated London News for 30 January 1864 indignantly refers to "The Great Scandal Case" of  George Victor Townley, convicted of the cold blooded murder of Miss Elizabeth Caroline Goodwin. I immediately wondered what the circumstances were that had so affronted the gentlemen of the press? We are used to the fourth estate today taking a stance over a matter of j[...] Continue Reading

Ruth A Symes explores how our ancestors decorated for Christmas, from mistletoe to paper chains Greenery and fruit, sparkle and snow, colourfully dressed tables and walls inscribed with Yuletide mottos – Christmases past were decorated using much the same general combination of ideas as Christmases today. But the specifics of the way our ancestors decorated their homes at any given time in the past dep[...] Continue Reading

Anthony Boulton presents a unique and fascinating memoir of his grandfather's experiences before, during and after World War One The Great War cast its shadow over my grandfather's life even before it began, because in August 1914 he went on a cook's tour of the Rhineland. It might be thought that this was not the best time to visit Germany, but the holiday had been booked months beforehand when the Europ[...] Continue Reading

Rebels with a cause

On 8 October, a Sunday, the people of Beverley were disturbed by the ominous sound of the town's common bell. Some will have understood the meaning from previous ringings. Others will have recalled that, a few days earlier, they had seen the beacons fired on the southern horizon in nearby Lincolnshire, and will have connected the dots. Others still will have heard rumours of an uprising around Louth, and[...] Continue Reading

A day at the museum

For the last 400 years, museums have offered a way for people to experience treasures from across the globe, as Margaret Powling explores The earliest illustration of a natural history 'cabinet of curiosities', from 1599 This question is something of a rhetorical one: what do you do when you have bought a 27-ton railway engine? Richard Cuming, a railw[...] Continue Reading

Ruth A Symes explores the personal touches left behind by our ancestors in the form of graffiti We tend to investigate the lives of our ancestors through conventional written records, both public and private, but further evidence of their existence might sometimes be found etched on to aspects of the natural world (rocks and trees) as well as physical objects such as desks, do[...] Continue Reading

Sitting on the penitent’s stool

Family historian Chris Paton explains the judicial role of the kirk session in Scotland... Although Scottish parish registers helpfully allow us to trace who our ancestors were, it is the records of the kirk sessions that more specifically help us to understand how the Kirk worked within society as an institution. The registers of individual kirk sessions not only recall the every[...] Continue Reading

Denization and naturalisation records feature foreign artisans and aristocrats seeking a better life in Britain, says Laura Berry Stretching back as far as the chronicles will take us, these island shores have been awash with an endless flow of 'strangers' born overseas, 'friendly aliens' for the most part. With few legal barriers to immigration before the 1905 Aliens Act, Britain became[...] Continue Reading

A May to remember

Keith Gregson explores Britain's worst railway disaster, which has often been overlooked because it occurred in the midst of World War One No more upon the Links of Leith these Scots lads be seen, For they did meet a sad sore fate down near to Gretna Green Contemporary postcard poem The Queen famously described the year 1992 as an annu[...] Continue Reading

Angela Buckley reveals how you can track down your criminal ancestors – assuming they were caught All families have skeletons in their genealogical closets and finding a criminal ancestor adds colour to a family tree; even the most 'respectable' families have secrets lurking just under the surface. Many factors can drive an individual to commit a crime and, if your ancestors were struggling to survive, then th[...] Continue Reading 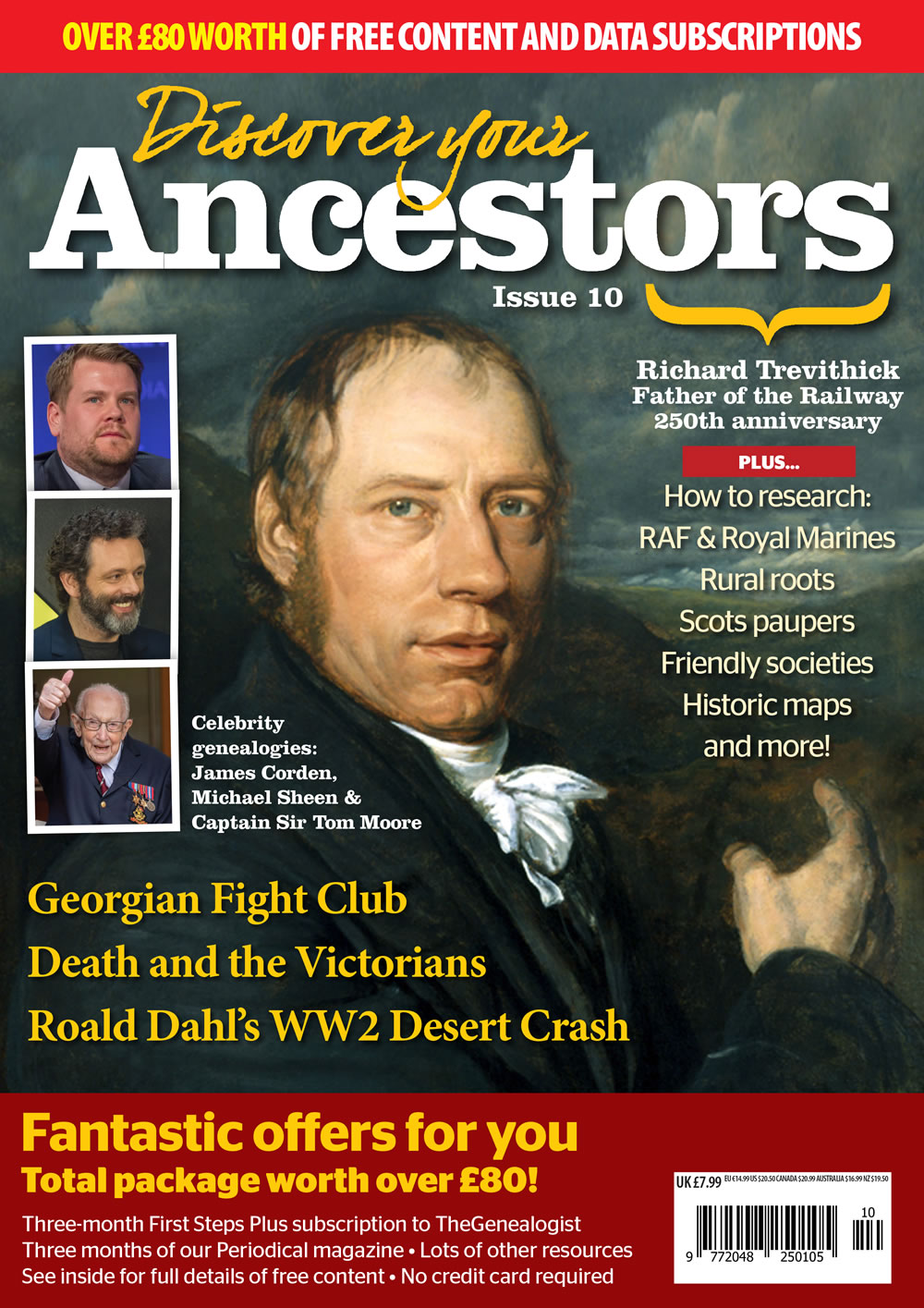